The sweet smell of the warm yeast and sugar bubbling up in a well of white flour awakens me to the ritual of a happy Sunday morning. With love and devotion my mum dedicatedly kneads the soft white dough in her worn out brown tureen. Her nimble fingers twisting and turning with the experience of any master chief. Her body swaying in harmony to the clapped out wireless crackling tunes of old in the background. She skilfully captures the air bubbles, gently teasing them into each devoted twirl. With a flowing movement she pummels the white gooey dough leaving her working class imprint on every downward thrust. Masterfully she shapes it into a big soft ball then covers it with a damp tea towel. With her usual efficiency she places it onto the cast iron hob and swings it towards the roaring coal fire where it is left to rise.
END_OF_DOCUMENT_TOKEN_TO_BE_REPLACED 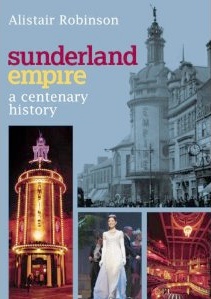 The unfamiliar absence of children’s voices spoke volumes as I first entered the Sunderland Empire theatre one cold and dismal Wednesday afternoon. The usually elegant entrance was still asleep from the previous evenings entertainment.

Wearily I climbed the the short staircase leading to the Vesta Tilly bar where the patrons usually met for drinks  before each show.The opulent mirrors, normally glistening in the splendour of the evening, were now a sorrowful sight of unpolished prisms and unreflective of their familiar beauty on this dowdy afternoon. Cheer up old gal, was my immediate reaction to the sombre start wandering casually over to the bar, where sparkling lights were beckoning.
END_OF_DOCUMENT_TOKEN_TO_BE_REPLACED

I’ve always ran away from poverty, using it as a trampoline to launch myself off onto better things, turning my back on its existence refusing to accept its misery.

In 1942 I was born and bred in a mining community a small village called Silksworth with the pit at one end and the long arm of the law, the local cop shop at the other. An ugly mile of grimy colliery houses, Blind Lane, so aptly called; lay in between, all uniformly belching clouds of deathly smoke in to the impoverished atmosphere. Behind them ran the pits railway, which was the local playing area for our young, where a dear friend lost a leg being ran over by a train. Adding to this depressing scene was the infamous pit waste heaps. The continuous stench of sulphurous fumes rising from the hot ash was forever polluting the air in our small village. Often causing major health hazards and creating dangers for our vulnerable children. However this was partially controlled later and sprayed with the dirty water pumped up from the mines. I often wondered which was worse as neighbouring villages suffered the continuous drone from the electrically operated pit pulleys, as they menacingly ran their gruesome gauntlet swinging dangerously in the air, leaking its foul odour of unsightly substances, carrying unwanted by products to the North East coast. On arrival the pulley automatically swung out like a hopping in a fairground, around the u shaped bend, dispersing its contents from a great height into the North Sea, silhouetting the natural beauty of the area with a never ending flurry of filth.
END_OF_DOCUMENT_TOKEN_TO_BE_REPLACED